Readers from the University of Hong Kong might be aware that ‘interdisciplinarity’ is one of the 3+1 I’s stated as the University’s strategic goals, along with innovation, internationalisation and impact. Has anyone ever wondered whether the word was chosen for the first letter ‘I’ (so that all the four words start from an ‘I’) or whether there was an important message behind?

‘Interdisciplinarity’ is perhaps one of those popular words that are being used by people in all kinds of situations without a careful thought about the embedded meaning. Whenever more than one discipline is involved, interdisciplinarity seems to apply.

One way to understand a concept is to put it together with its related terms. Using the powerful Google search, I quickly identified a number of related words, for example, multidisciplinarity, cross-disciplinarity, and transdisciplinarity. An examination of these four words has convinced me that ‘interdisciplinarity’ is indeed the one that can convey the meaning most precisely. Let me briefly discuss them here:

For example, a student major in Education may also take some courses in Finance or Computing but this does not mean that he or she can apply the knowledge and skills from these disciplines in an integrated manner to tackle problems. An example in the classroom might be two groups of students from two disciplines taking one course together without any interactions.

There was a story depicting people working in a multistory office-building complaining about the long waiting time for lifts. While others focused on improving the service of the lifts (but found it not possible in that old building), one young man suggested installing mirrors in the lift boarding areas to reduce the boredom of the waiting people, which successfully stopped the complaints at a low cost. In this case, a seemingly ‘engineering’ problem was solved by a non-engineering approach.

To one extreme, transdisciplinary can mean the dissolving of existing disciplinary boundaries and the creation of new academic groups around new functions or perspectives (Davies & Devlin, 2007).

Though the meanings between ‘interdisciplinary’ and ‘multidisciplinary’ are not so different in the Cambridge dictionary, the discussion in the literature has distinguished ‘interdisciplinarity’ from its related terms. One important feature is that ‘interdisciplinarity’ involves some extent of integration of the disciplines while the inquiry to a problem is proceeding (Davies & Devlin, 2007; Golding, 2009; Petrie, 1976). The value and insights generated from the integration process are expected to exceed the summing of the possible contributions from each discipline (Pharo, Davison, McGregor, Warr & Brown, 2014).

For example, a course discussing about alcohol addiction might involve perspectives from biologists, medical doctors, and behaviorist scientists. Rather than asking students to adopt each of these disciplinary approaches separately, interdisciplinary teaching might require them to take consideration of the possible contributions from each disciplinary to the core problem and formulate coherent and coordinated arguments or solutions.

Golding (2009) provides a guideline for designing an interdisciplinary subject. Here is a summary of the key questions adapted based the template. The original article can be found here:
http://melbourne-cshe.unimelb.edu.au/__data/assets/pdf_file/0007/1761190/Interdisc_Guide.pdf (p.12) 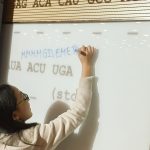 Interdisciplinarity at the course level: How strong is your “theme”? – Gavin PorterTeaching and Learning Connections #5 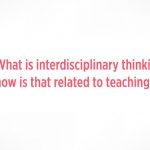